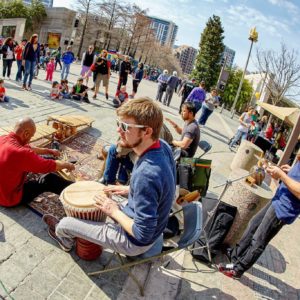 The music of Brandon Carson (b. 1994) has been described as “stunning” (Cheryl Callon, TheatreJones), and has been said to convey “menace, trepidation, glee and joy and everything in between” (Margaret Putnam, TheatreJones). Carson’s compositions encompass a wide variety of sounds stretching from the Western Orchestral, to Balinese gamelan, to music created with his own uniquely crafted instruments.  A “sound artist” to look out for.

Brandon is a graduate of Southern Methodist University Meadows Music Composition program in Dallas, Texas. After SMU, Brandon served as the 2016-17 Percussion Director for Prince of Peace Christian School in Carrollton, TX. Brandon currently resides in Los Angeles pursuing his Masters in Composition and Performance at California Institute of the Arts.

Some of Carson’s recent collaborations have included creating musical scores for contemporary dance. Brandon has provided three scores for Dallas based choreographer Joshua L. Peugh, including Big Bad Wolf, which premiered in South Korea at Seoul Performing Arts Center in October 2017. The most recent score of the three, Aladdin, حبيبي , was a 75 minute work featuring traditional Arabic, Chinese, and African instruments. This dance focused on the Arabian Nights story of Aladdin, and dealt with this story’s themes in a modern context. Aladdin, حبيبي , and Can’t Sleep but Lightly (Brandon’s gamelan-marimba hybrid score for New York based choreographer Gabrielle Lamb) were both named as standout performances of 2018 in performance art review TheatreJones.

A highlight of 2018 for Brandon was his participation in the January 27, 2018 performance of John Luther Adam’s Inuksuit at the United States-Mexico Border in San Diego, California.

Music always brings different people and different ideas together, …and that is a large part of how Brandon works.